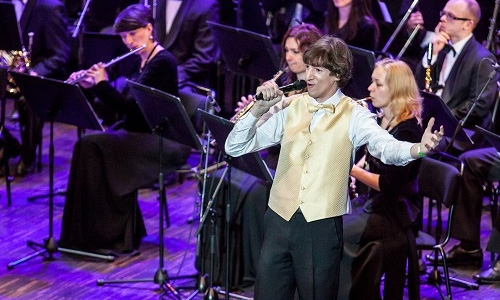 Integrative Arts Festival “Come along” was established in 1997, when the chairperson of the foundation Sarma Freiberga on the St. Valentine’s Day held the first charity event under the title “Come along!”

Back then Latvia had lived as an independent state only for a few years and the idea of a wider integration was alive only in rare minds of the society. In the reality there were almost none of them. But even then Sarma Freiberga, who at the time had her private dance school, was determined to realize her goal – to find her way to help children with disabilities to ease the process of integration into the society as a whole. Finally, this was also the way how the idea about the festival was born- to promote an integrated society through human creative power and his artistic talents.

Our festival is an invitation for every child and young person with special needs to come together with the ones who are healthy and have their familiestomeet on the stage – to sing, dance, act, cite poetry together with other children and young people so that they feel equal in the society. If not in the every day’s life then at least via the creative expressions everyone can be and feel equal.

Today the charity campaign, started back in 1997, has grown to a large international festival, which has expanded over the whole country. The festival has grown both – in the numerical terms of participants–from 30 children in the first year to over 1,000 members in the recent years, as well as by expanding its geographical boundaries – from Riga the festival has moved also to all the Latvian regions – Latgale, Kurzeme, Vidzeme and Zemgale. For several years also participants from Estonia have joined the festival. In addition, the festival continues to seek new friends outside the Latvian border.

The festival takes place in several stages- firstly, 4 regional festivals are held and afterwards the best performances and creative art works are promoted for the main concert and exhibition in Riga.

Over the years the best performances of the festival have been given by very gifted and talented children, who have then afterwards performed not only in the front of Latvian society, but a group of partially sighted and blind children musicians have also been invited to play inthe front of the Queen Elizabeth when she visited Latvia.

For several years, the best dancers of the festival (also the handicapped children) have participated in the International Child and Youth Dance Festival “Sprīdītis”, which since 1995 was held in Latvia for 12 times.

The Festival “Come along!” has received support from the Ministry of Children and Family Affairs, municipalities and entrepreneurs.

Unfortunately, in order to ensure the existence of the festival the current funding is not enough. Therefore the Festival Foundation invites to donate financial resources for its operation because by the long-term existence the festival ensures the development of children and young people with special needs. By helping these children, we help ourselves and also give an opportunity for everyone to live in a better and more harmonical society.

The Festival Foundation has been allocated to public benefit organization status, which allows companies to donate funds and according to the Latvian legislation receive tax shields and discounts in exchange.

Photography exhibition What I Noticed…

Leave your e-mail to sign up for our newsletter